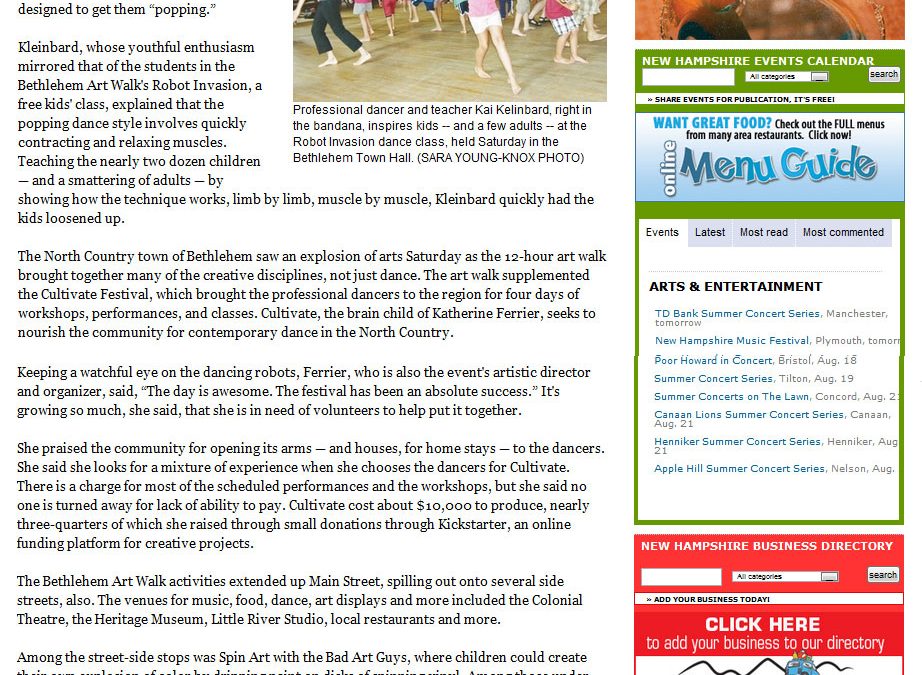 Explosion of arts at four-day Cultivate Festival in Bethlehem

BETHLEHEM — BAREFOOT BOYS and girls shared the space on the wooden floor in the Bethlehem Town Hall on Saturday afternoon with teacher Kai Kleinbard. Kleinbard, a professional dancer at the four-day Cultivate Festival, led the kids through a series of exercises designed to get them ‘popping.’

Kleinbard, whose youthful enthusiasm mirrored that of the students in the Bethlehem Art Walk’s Robot Invasion, a free kids’ class, explained that the popping dance style involves quickly contracting and relaxing muscles. Teaching the nearly two dozen children – and a smattering of adults – by showing how the technique works, limb by limb, muscle by muscle, Kleinbard quickly had the kids loosened up.

The North Country town of Bethlehem saw an explosion of arts Saturday as the 12-hour art walk brought together many of the creative disciplines, not just dance. The art walk supplemented the Cultivate Festival, which brought the professional dancers to the region for four days of workshops, performances, and classes. Cultivate, the brain child of Katherine Ferrier, seeks to nourish the community for contemporary dance in the North Country.

Keeping a watchful eye on the dancing robots, Ferrier, who is also the event’s artistic director and organizer, said, ‘The day is awesome. The festival has been an absolute success.’ It’s growing so much, she said, that she is in need of volunteers to help put it together.

She praised the community for opening its arms – and houses, for home stays – to the dancers. She said she looks for a mixture of experience when she chooses the dancers for Cultivate. There is a charge for most of the scheduled performances and the workshops, but she said no one is turned away for lack of ability to pay. Cultivate cost about $10,000 to produce, nearly three-quarters of which she raised through small donations through Kickstarter, an online funding platform for creative projects.

Among the street-side stops was Spin Art with the Bad Art Guys, where children could create their own explosion of color by dripping paint on disks of spinning vinyl. Among those under that tent was artist Jason Tors, whose new works were on display at Cold Mountain Caf�. Besides the dancers, there were 25 local artists and 15 musicians.

At the spin art tent, Tors held a half-finished art rock in his hand. He said that he likes to make art accessible to everyone. That has meant his young son, too. Tors explained how when he first starting taking his son and friends on easy hikes he would walk ahead and draw smiling faces on small rocks with sharpies, then leave the stones along the path.

‘It would be like a scavenger hunt for them,’ Tors said. ‘They would come home with a pocketful of rocks.’

Down the road from the Bad Art Boys, volunteers Eevi Cowell of Bethlehem and Raven Larcom of Easton were offering face painting. Asked what’s popular with the kids, Larcom replied, ‘Hearts, butterflies and snakes.’

The day also included a flash mob event at the farmers’ market. It was a success, Ferrier said, and started with people milling about, then coming together from all corners when sudden, loud music burst into the air. She said the dance included kids, adults, vendors, shop owners and passersby, and that she hopes to post the video of it soon.

For look at the festival, go to bethlehemartwalk.com or cultivatedancenh.com.