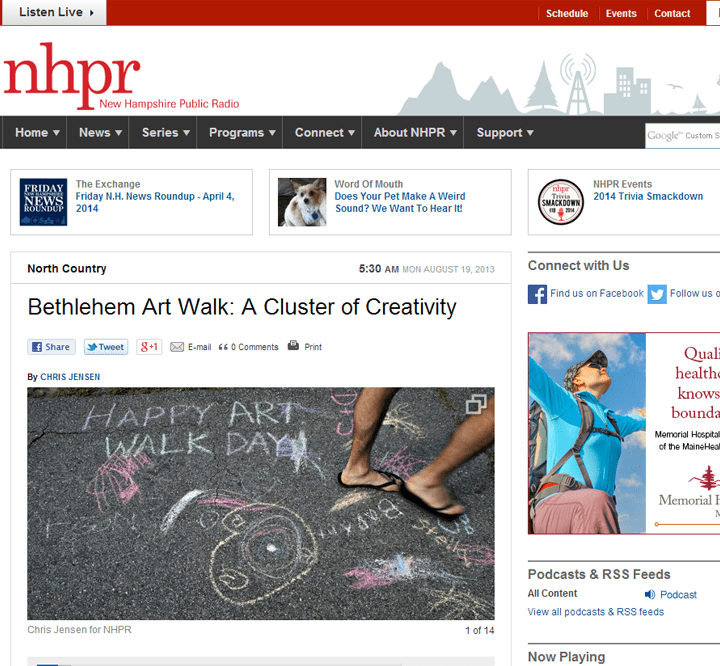 Saturday was the second birthday of the Art Walk in Bethlehem and up and down Main Street dozens of artists from the region gathered to show, discuss, demonstrate and sell their art.

“The art walk is a celebration of creativity,” said Katherine Ferrier, who worked with Angel Larcom and other volunteers to organize it. “This area is rich with artists.”

At the gazebo local groups took turns providing mini concerts while locals and tourists lounged on the grass.

Booths and tents and displays lined Main Street, which doubles as U.S. Route 302.

At one spot Kristine Soleri, a retired dancer who has worked in ceramics for about two decades, showed some of her work.

“More recently I have been doing work in Majolica, which is a technique of low-fire earthenware which is very colorful and reminiscent of Spanish and Portuguese ceramics,” said Soleri, the daughter of Paolo Soleri, the architect who created the “urban laboratory” of Arcosanti.

There were paintings and drawings and sculpture.

There were crafts such as those shown by Steve Bahrakis who takes discarded bits and pieces sometimes found in scrap yards or the dump and recycles them.

One creation was a locomotive.

There was plenty for children, too, from hoola hoop classes to ogling the locomotive Bahrakis made.

There were dance classes and performances, all part of the Cultivate Contemporary Dance festival.

There was a farmer’s market and a flash mob performance.

And there was photography.

That included the work of  Elvira Piedra, who uses an 8 X 10 view camera and gave a talk on what inspires her and how she became involved in photography.

“So, this was the first real picture in my childhood, at age eight, that captivated me,” she said.

Another Art Walk is planned for next year.