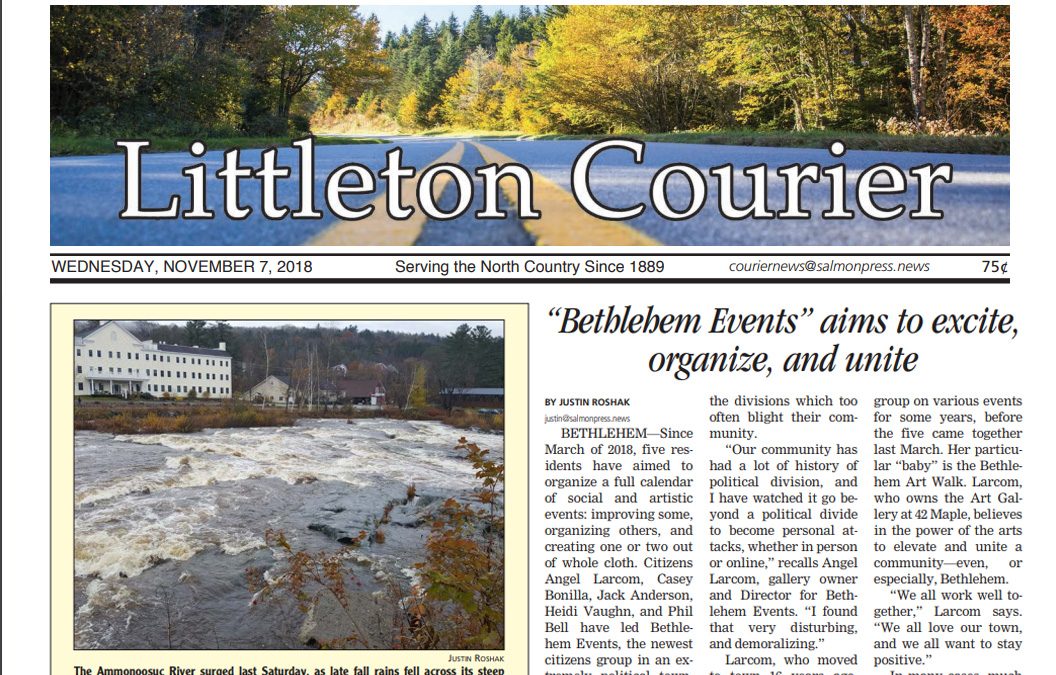 Bethlehem — Since March of 2018, five residents have aimed to organize a full calendar of social and artistic events: improving some, organizing others, and creating one or two out of whole cloth. Citizens Angel Larcom, Casey Bonilla, Jack Anderson, Heidi Vaughn, and Phil Bell have led Bethlehem Events, the newest citizens group in an extremely political town, which aims to transcend the divisions which too often blight their community.

“Our community has had a lot of history of political division, and I have watched it go beyond a political divide to become personal attacks, whether in person or online,” recalls Angel Larcom, gallery owner and Director for Bethlehem Events, “I found that very disturbing, and demoralizing.”

Larcom, who moved to town sixteen years ago, had worked with a small group on various events for some years before the five came together last March. Her particular “baby” is the Bethlehem Art Walk. Larcom, who owns the Art Gallery at 42 Maple, believes in the power of the arts to elevate and unite a community—even, or especially, Bethlehem.

“We all work well together,” Larcom says, “We all love our town, and we all want to stay positive.”

In many cases, much of the events already existed, and have merely been organized, or re-organized.

Bethlehem Events folded together the Art Walk, Old Home Day, and a revamped parade—together, re-branded as Summer Fest. New this year were hot air balloon rides and a beer tent.

Halloween weekend saw the unification of storied events within a regional framework: BES Nest’s Harvest Festival, the Colonial Theater’s BooFest, neither of which has previously happened on the same day, Larcom says.

At the same time, she called Nathan Karol, Director at the Littleton Chamber, to see if each towns’ events could be shifted to different days on the same weekend. She said coordinating that with Karol was “really effortless”, and as a result, Bethlehem and Littleton citizens were able to attend all of each others’ Halloween festivities.

Connecting and coordinating events is, “exciting” and “fun”, Larcom says, but she insists that Bethlehem Events is not intended to do everything:

“We don’t have a Chamber of Commerce here,” she points out, “Everyone wants one, but nobody wants to do the work.”

“By being an independent 501c3 [nonprofit], we have the autonomy to make the decisions that we want to. We’re not asking for warrant articles, we’re not leaning on the taxpayers to support what we’re doing. We’re finding alternative ways to fund what we do,” she explained, “It’s important, because our town has a history of toxic politics, to keep the politics out of it as much as possible…I want all of us to work together because there’s already a divide.”

“It’s a lot of work, but it’s very rewarding work,” Larcom says, “Everybody wants something positive in our town.”

Co-founder and fellow Board member Casey Bonilla’s “baby” is Light It Up Blue, a UN-recognized holiday for autism awareness. Her son, 24, is autistic—so starting seven years ago, every April 2nd buildings in town put in blue light bulbs to remind folks of those living with the experience of autism.

It started with the Town Hall and grew from there. Bonilla has built partnerships with local businesses like Home Depot, which donates bulbs for her to distribute. Bonilla says that Bethlehem Events has given her project a push and that it fits with her broader mission:

“We decided to all join forces because we all had the common goal of bringing more positivity to town,” she said, “We just want people to hear about how tight the community is in Bethlehem…when people hear ‘Bethlehem’, we want them to think of the events.”

This year, participation from the business community in Light It Up Blue reached an all-time high.

Asked about the advantages she saw in the organization, Bonilla cited the benefits of official nonprofit status, which she said conferred additional legitimacy, and gave potential donors he confidence that their money would be well spent.

“When you have a nonprofit, people are more likely to donate,” she explained, and added, “We’ve had enormous support from the community.

Bonilla declined to quote fundraising numbers but said she has been encouraged by the growth of donations and community support.

Fire Chief Jack Anderson began Christmas in Bethlehem nine years ago—a celebration of the start of the holiday season on the first Saturday in December. For Anderson, the combination of street part, tree lighting, bonfires, and fireworks provides an event that all citizens, of all ages and incomes and political positions, can enjoy:

“The whole idea of it is to provide an event that anyone can bring their children to, no matter how many they have, and whatever their financial means are.”

Anderson, who serves as official Chair of the Bethlehem Events Board, said he was glad to share the workload, and said each board member brought their own special talents to the organization: in particular, he praised Bonilla’s entertainment and organizational talents, and Larcom’s promotional energy.

“It makes it a lot easier on me personally,” he explained, “It brings it to a different level, and makes it easier on all the participants involved.”

Anderson adds that Bethlehem Events gives him confidence in the future of his celebration, on which he has labored nearly a decade.

“The other big thing with me is, that this event will carry on beyond me. That’s very important to me,” said Anderson, who said he is going on seventy. “I can rest assured,” he added.

Bethlehem Events’ next big project is already well into the works, and is planned for late February. While Angel Larcom is keeping the details under wraps, she was willing to hint at the event’s purpose: to liven up the dark, cold late season.

“We’re going to send winter off,” she says, cryptically. The theme will be “Fire and Ice”.

Reworking of Main Street’s WREN mural, which Larcom said has not aged well, and further educational outreach, especially to students, are other priorities she hopes to expand on in the new year.