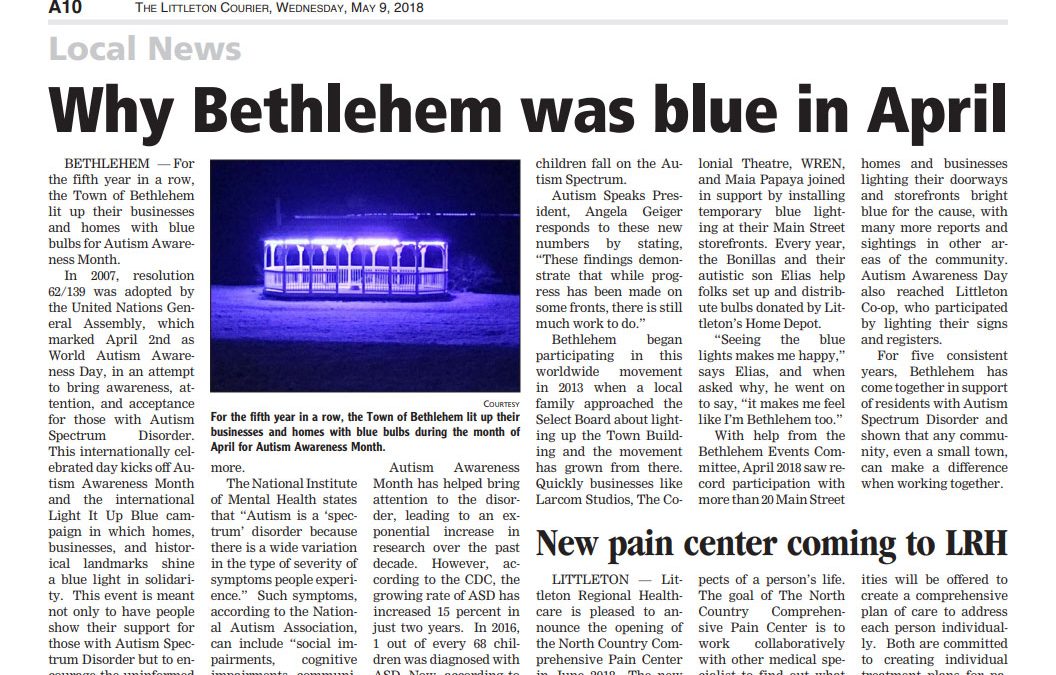 Why Bethlehem was blue in April

For the fifth year in a row, the Town of Bethlehem has lit up their businesses and homes with blue bulbs for Autism Awareness Month.

In 2007, resolution 62/139 was adopted by the United Nations General Assembly, which marked April 2nd as World Autism Awareness Day, in an attempt to bring awareness, attention, and acceptance for those with Autism Spectrum Disorder. This internationally celebrated day kicks off Autism Awareness Month and the international Light It Up Blue campaign in which homes, businesses, and historical landmarks shine a blue light in solidarity. This event is meant not only to have people show their support for those with Autism Spectrum Disorder but to encourage the uninformed to ask questions about the meaning and learn more.

The National Institute of Mental Health states that “Autism is a ‘spectrum’ disorder because there is a wide variation in the type of severity of symptoms people experience.” Such symptoms, according to the National Autism Association, can include “social impairments, cognitive impairments, communication difficulties, and repetitive behaviors.”

Autism Awareness Month has helped bring attention to the disorder, leading to an exponential increase in research over the past decade. However, according to the CDC, the growing rate of ASD has increased 15% in just two years. In 2016, 1 out of every 68 children was diagnosed with ASD. Now, according to the latest government studies, 1 out of every 59 children fall on the Autism Spectrum. Autism Speaks President, Angela Geiger responds to these new numbers by stating, “These findings demonstrate that while progress has been made on some fronts, there is still much work to do.”

Bethlehem began participating in this worldwide movement in 2013 when a local family approached the Select Board about lighting up the Town Building and the movement has grown from there. Quickly businesses like Larcom Studios, The Colonial Theatre, WREN, and Maia Papaya joined in support by installing temporary blue lighting at their Main Street storefronts. Every year, the Bonillas and their autistic son Elias help folks set up and distribute bulbs donated by Littleton’s Home Depot. “Seeing the blue lights makes me happy,” says Elias, and when asked why he went on to say, “it makes me feel like I’m Bethlehem too.”

With help from the Bethlehem Events Committee, April 2018 saw record participation with more than 20 Main Street homes and businesses lighting their doorways and storefronts bright blue for the cause, with many more reports and sightings in other areas of the community. Autism Awareness Day also reached Littleton Co-op, who participated by lighting their signs and registers.

For five consistent years, Bethlehem has come together in support of residents with Autism Spectrum Disorder and shown that any community, even a small town, can make a difference when working together.