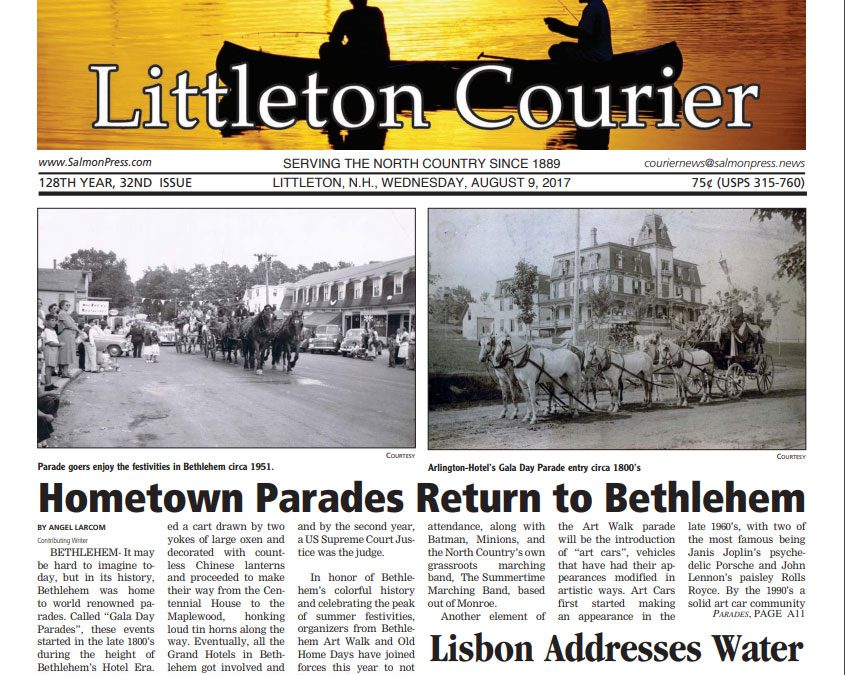 It may be hard to imagine today, but in its history, Bethlehem was home to world-renowned parades. Called “Gala Day Parades”, these events started in the late 1800’s during the height of Bethlehem’s Hotel Era. The parades were the by-product of dangerous and sometimes fatal stagecoach races that would occur on Lewis Hill Road, Swazey Lane, Cherry Valley Road and many other neighborhoods in the village.

In August of 1887, guests at the former Centennial House overloaded a cart drawn by two yokes of large oxen and decorated with countless Chinese lanterns and proceeded to make their way from the Centennial House to the Maplewood, honking loud tin horns along the way. Eventually, all the Grand Hotels in Bethlehem got involved and Stage Coach Days were born. Stagecoaches and their horses would be decorated in the colors of each hotel, trimmed with paper, silks, bunting, and flowers. Some hotels would spend upwards of $3500 to adorn their coaches. Prizes were awarded, brass bands were marching, and by the second year, a US Supreme Court Justice was the judge.

In honor of Bethlehem’s colorful history and celebrating the peak of summer festivities, organizers from Bethlehem Art Walk and Old Home Days have joined forces this year to not only create an energetic one-day festival but to bring parades back to Bethlehem as well. Scheduled for 2pm on Saturday, August 12th, the Art Walk Parade will offer no shortage of antics, loud noises, and frivolity. Senate Minority Leader Jeff Woodburn will be in attendance, along with Batman, Minions, and the North Country’s own grassroots marching band, The Summertime Marching Band, based out of Monroe.

Another element of the Art Walk parade will be the introduction of “art cars”, vehicles that have had their appearances modified in artistic ways. Art Cars first started making an appearance in the late 1960’s, with two of the most famous being Janis Joplin’s psychedelic Porsche and John Lennon’s paisley Rolls Royce. By the 1990’s a solid art car community had been born, inspired by movies, books, and artistic events like Burning Man.

The weekend’s festivities kick off at the Colonial Theatre on Friday night, with a live performance by Banda Magda at 8pm. Led by Greek-born composer, orchestrator, singer and accordionist Magda Giannikou (Kronos Quartet, Louis CK), Banda Magda moves from samba to French chanson, from Greek folk tunes to Colombian
cumbia and Afro-Peruvian lando.

Beech Hill’s 10th Annual Antique, Classic, Mustang and Ford Car Show will wrap the weekend schedule. Held on Sunday, August 13th, this classic car event occurs from 10 am to 2 pm with trophies and awards, raffle prizes, and the Raymond S. Burton Sportsmanship Award announcement as well. Some of these classic cars will also be attending the Artwalk Parade on Saturday.

Art Walk and Old Home Day events will begin at 10 am on Saturday, as vendor and musicians set their booths up on Main Street and Maple Street. The WREN Market will be in full swing, and the Bethlehem Skatepark Association is hosting a Skate/Jam/BBQ/Concert Fundraiser from 12pm to 5pm with live performances by some of the most well-loved punk bands in the region, and burgers and dogs on the grill.

Bethlehem Emergency Services is offering a full day of activities at the Fire Station and Bethlehem Recreation Department’s new director, Tim Fleury has scheduled a large array of kids’ games from 11 am to 1 pm near the Town Park. Live performances include local musicians Ana D’Leon, Donna Dia Lowre, and Adam Rezcek, among many others.

Now in its sixth year, Bethlehem Art Walk has become a much-anticipated and well-loved annual event. With a variety of sights, sounds, tastes, and smells, it has something for everyone – young and old alike. If organizations are interested in parade participation, they can either email [email protected] or simply show up at the corner of Turner and Noyes Streets at 1 pm on August 12th. For more information about the ArtWalk, visit www.bethlehemartwalk.com.